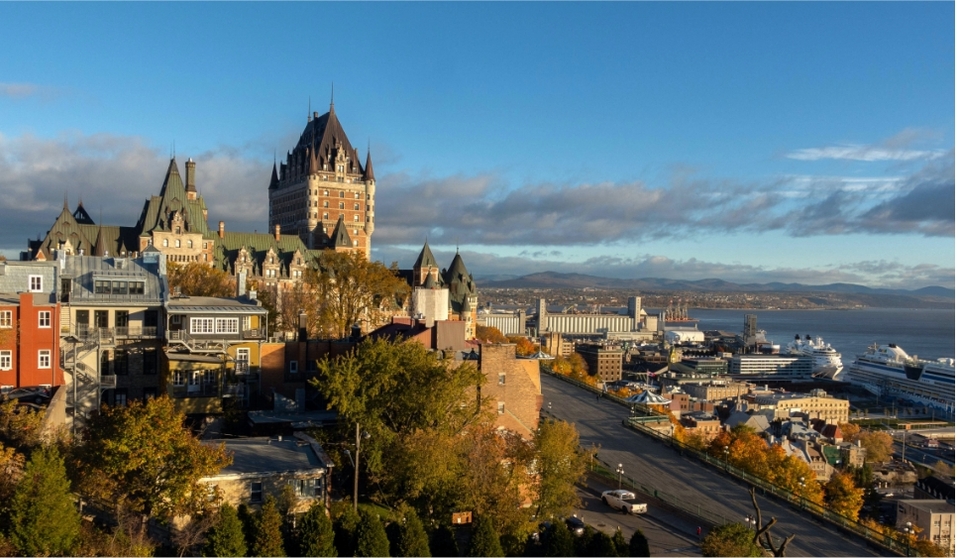 Québec City is unlike any other destination in Canada. With its cobblestone alleys, beautiful architecture and French language echoing in the streets, you’d think you were in Paris. The metropolis offers a sort of je ne sais quoi that can only be found in charming European countries like France or Switzerland, yet there’s something distinctively unique about it... It’s neither Canadian, European, nor American, it’s Québécois. Recognized as a UNESCO World Heritage Site, Québec City is the birthplace of French Canada, the only walled city left standing in North America and boasts 400 years of history, making it one of the oldest cities in all of Canada. Rent or charter a Luxury Private Jet and experience all the beauty, history and culture of Québec City.

If landing directly in the city isn’t essential, you could also land at a smaller airport in and around Québec City, the choice is yours. This is just one of the many benefits that come with a private jet rental.

Planning your trip to Québec City

Everything seems to be more magical in Québec City. There are castle-like buildings, charming bistros and shops, and the language of love can be heard even from the treetops.

Old Québec is often what we picture when thinking about Québec City, and for good reason! The historical district has everything, from the oldest stone church in North America to a premier shopping district filled with unique boutiques, incredible restaurants and artists selling hand-painted works and crafts. It’s also home to the world’s most photographed hotel, the Château Frontenac. The historical castle-like chateau serves as a reminder of the luxurious hotels built by the Canadian Pacific Railroad Company in the 1800s. Another notable landmark in Old Québec that you must see, is its fortifications. Participate in a guided tour or walk along the 4.6 km wall, either from on top or next to it, to uncover the history behind this massive stone barrier.

Québec City also upholds several traditions that create excitement amongst tourists and locals year after year. The most popular among them is the Annual Carnaval, also known as the Winter Carnival. Every February over one million people come together to enjoy a host of activities, including, the spectacular evening ice parade, skating and if they’re brave enough, a snow bath. While you’re there, enjoy some frozen maple syrup and say hello to Frosty the Snowman’s favourite cousin Bonhomme.

If great food is what you’re after, then you’re in luck as Québec City reps quite the food scene. You can find a number of traditional French restaurants, ethnic food, as well as modern cuisine. From the French-Canadian meat pie tourtiére and poutine to the classic sugar pie and rich pouding chômeur, “poor man’s pudding,” Québec City offers a delicious assortment of mains and sweets based on tradition.

With an abundance of things to discover year-round, Québec City is indisputably a Canadian city worth visiting. Make your trip to Québec City even more enjoyable on a Momentum Jets Private Luxury Jet. Our travel concierges offer door-to-door travel services, which means we take care of booking ground transfers, transportation, and hotels. The only thing you have to do is board the jet and enjoy your time in this historical one-of-a-kind city.